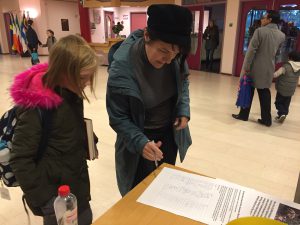 On 31 October, 2017, ISA’s Amnesty International Club engaged in their annual tradition of hosting an event called the Amnes-Tea, “ a campaign that is able to raise awareness about humanitarian issues across the whole world, making everyone an active member of society in order to create positive change”, according to Isabelle Buklarewicz, chair of the ISA’s Amnesty club. Students, teachers, and parents are encouraged to sign petitions to help those whose human rights have been violated, and free tea and cookies are given out as incentive. All it takes to help make a change is a signature, for as these signatures from all over the world pile up in a single office, governments are made aware of the fact that their actions are under international scrutiny and are pressured to take action to free those whose rights have been abused.

This year, the club collected signatures for two causes, one of which was the Saudi Arabian blogger Raif Badawi, who was unfairly detained in June of 2012 who, according to Saudi Arabian forces, insulted the Islamic religion. He was then sentenced to 10 years in prison as well as 1000 lashes in January of 2015. 50 of these lashes were inflicted in a public square. It is the opinion of medical professionals that he will not survive the rest of the lashes. His case has been taken up by several organizations, including Amnesty International, who are fighting to have him freed. The second was the catastrophic issue of the ethnic cleansing that is currently happening in Myanmar. As of October 16, 537,000 Rohingya refugees have come to Bangladesh after escaping from the brutal environment of Myanmar’s Rakhine State. Those who have not fled their home suffer as the nation’s forces inhibit their access to aid provided by organizations. Commander in-Chief of the Myanmar army, Min Aung Hlaing has the ability to cease the violence that is happening in Myanmar. Gathering signatures will illustrate the scale of demand there is for the violence to stop.

Over 150 signatures were collected. Molly Christophers, a member of the club and a participant in the event says, “It was really great to see the ISA community come together to support this important cause.” The Amnesty International club has raised immense awareness about human rights within its community, and it hopes to further make a change that resonates on an even larger scale.