Fate smiled upon our grade 8 students and their intrepid supervisors on the first Thursday of November, 2017. A full day spent walking outdoors in Amsterdam at this time of year can certainly be a roll of the elemental dice, but a brisk, dry and enlightening experience was in store for our Middle School historians.

The story of the Netherlands and its fabled Golden Age (17th century) is a staple of secondary level history studies in Dutch schools. However, the catalytic role that slavery played in the growth and administration of an empire plays a very minimal part in the Dutch history curriculum. Our 8th graders heard the personal experience of our guides at Amsterdam’s Scheepvaartmuseum (Maritime Museum): out of six years of studies on the Goude Eeuw in his secondary school, he recalled a total of one page examining the issue of slavery. And so, the guides at the museum were very impressed by the level of detail with which ISA students endeavoured to delve into the topic, with the annual walking tour a highlight of the unit. The tour gives an opportunity to students to connect history to the area they live in today, and reflect upon how the past continues to affect modern life.

The walking tour of Amsterdam took grade 8 all across a familiar city, drawing attention to unfamiliar sites. Memorable stops in the tour included the headquarters of both the storied Dutch West India (WIC) and Dutch East India (VOC) companies, and the hidden-in-plain-sight ‘Moor House’- a stark reminder of the overt racism endemic in the history of Amsterdam. At every point of interest in the tour, students were reminded that, while slaves did not physically come to the Netherlands, slavery on Dutch plantations in the West-Indies and East-Indies, and the trade of slaves from West Africa across the Atlantic, were key driving forces behind the prosperity of an empire, and the growth of the city we enjoy today. The ISA staff leading the tours went into detail about how colonial wares like coffee, cotton, spices, gold etc. were farmed and mined by slaves, and returned to Europe to be sold as luxury items, leading to massive profits for the Netherlands. At its zenith, the VOC was, and still remains, the most valuable company that has ever existed- adjusted for inflation to be over 10 times more valuable than Apple is today (worth over 7 trillion euro). 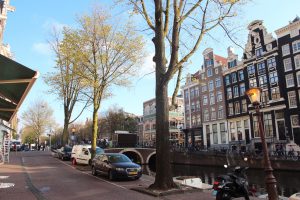 Oudezijds Voorburgwal 187. The Moor House can be seen on the right-hand side of the picture, marked by its date of construction- 1663.

The Trans-Atlantic Slavery Walking Tour is a wonderful opportunity for ISA students to learn about a fascinating, grim and too-often untold part of Dutch history that still impacts the world around us. Famous landmarks in the city, like the Royal Palace and The Amsterdam Waag, take on extra significance with an understanding of their pasts and legacies- a reminder that history is a fluid, living subject and not just confined to the pages of schoolbooks! The final stop at the Scheepvaartmuseum also gave a nice insight into the daily lives and struggles of the ordinary citizens of Amsterdam, who existed far from the opulence of the rich and noble of the Golden Age. 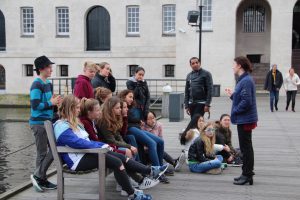 A Wrap Until Next Year!

Mr. Tweedie and his team of volunteer guides and supervisors can be satisfied with another excellently-run edition of one of ISA’s favourite outings. The city explorers returned to ISA just in time for the end of the regular school day; an impeccably timed adventure leaving the whole expedition with tired feet and enriched minds. 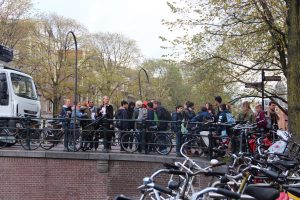 In the city centre, with history all around. The Amsterdam Waag can be seen in the background.