ISA Alum, Omer Manhaimer was recently recognised as a 2019 Forbes Under 30 Scholar, a programme which selects high-achieving students from top universities to come and participate in the annual Forbes under 30 event.  Omer was one of three students from Britain selected to attend.
Having attended the event in Detroit, he was able to connect and network with renowned business and social leaders, AI exports young innovators and entrepreneurs.  He gained valuable knowledge from the best of the best, including Tomas Pfister (Head of Research at Google Cloud AI and Serena Williams.
Omer also participated in, and won, the ErieHack competition, tackling the issue of algae blooms in Lake Erie.
#Under30Summit
https://www.isa.nl/wp-content/uploads/2019/11/Omer-Forbes-Under-30.jpeg 1152 1536 Megan Amelia https://www.isa.nl/wp-content/uploads/2015/08/ISA-logo.png Megan Amelia2019-11-08 16:09:232019-11-11 10:14:25ISA Alum Recognised as 2019 Forbes Under 30 Scholar

On Saturday, 8 June 2019, ISA returned to Amstelveen’s Schouwburg Theatre to celebrate the achievements of the Class of 2019 and their milestone of completing the IB Diploma Programme. The grade 12 students and their families enjoyed a moving night of inspirational speeches and uplifting performances, culminating in each student walking across the stage to receive their diploma and officially become a member of ISA’s alumni community.

The evening included a range of emotions as students reflected on their memories at ISA and thanked those that helped them through their journey. The ceremony concluded with a reception, giving students, families, and ISA faculty and staff a final opportunity to celebrate the Class of 2019’s accomplishments.

Awards were given to the following students:

The ISA Leadership Award is voted on each year by ISA faculty and is given to a male and female student. This year, the award was given to Simone Appel and Jack Marsh.

In recognition of his commendable effort and commitment to the service of others, Jake Raben was awarded the CAS (Creativity, Activity, Service) award.

The ECIS Award for International Understanding is presented to a student who has represented their country well, can speak at least two languages. Seohyun Kim received this year’s award.

The ISA Award is given to a student who personifies the goals of the International School of Amsterdam, has a positive attitude to education across a range of subject areas and upholds a high ethical and moral standard. The ISA Award was presented to Charlène van der Kooij.

In recognition of their prestigious talent in the sporting arena for ISA, Ellis Huistra and Celeste van Petegem were presented with the Simon Schilp Athletic Award.

Wendy Lee Oldfield graduated from ISA in 1999, having spent grades 6 to 8 at the old A.J. Erntstraat ISA campus, and then grades 11 and 12 at ISA’s current location.

After leaving ISA, Wendy studied graphic design at Chapman University in California, graduating with a Bachelor of Fine Arts in 2004. Since then, she’s co-authored two books on creativity; Caffeine for the Creative Mind and Caffeine for the Creative Team. She has also worked on a number of design projects for brands such as Google, Blizzard Entertainment, Pepsi, Chipotle and the NFL. Two years ago, Wendy joined a tech startup in Southern California as Design Director, allowing her to work with “a wonderful team of fellow designers, videographers and creatives,” a role which she thoroughly enjoys.

It is no wonder that Wendy has chosen to work in a creative industry. “I loved art [at ISA]. I loved the lab and all the paints and pencils and canvases and tools in the room that helped to bring concepts to life. I loved that the art room was quiet and had lots of windows and light, and I thoroughly looked forward to spending time there.”

Wendy has fond memories of her time at ISA including “the great group of friends I made”, which helped Wendy feel welcome and less isolated during her senior year at ISA.

Wendy and her husband, whom she married in 2011, currently live with their adorable Yorkie, Puck, in Anaheim, California where they can see the fireworks from Disneyland in their front yard

Pictured above are Wendy and her husband in the art room during their recent visit to ISA.

Juha Virtanen attended ISA from 1998 to 2004. After leaving ISA, he obtained his bachelor’s, master’s and doctoral degree from the University of Kent where he is now a Lecturer in Contemporary Literature at the School of English.

Juha, originally from Finland, started attending ISA after his family moved to Amsterdam for his father’s job. Originally only meaning to stay in the Netherlands for two years, Juha considers himself lucky that he was able to stay for six years:

“The six years I spent at ISA were definitely an influential period for me. All of the teachers I had for English […] were great at feeding and further encouraging my interest in literature, which obviously played a big role in my decision to study the subject at university.”

At the University of Kent, Juha primarily specialises in innovative British and Irish poetry, but he has also designed and taught modules on materials such as graphic novels. In addition, he is currently serving as the School of English’s Deputy Director of Education, as well as the programme director for Kent’s Master’s degree in The Contemporary, which is an interdisciplinary programme taught jointly by the University and the Institute of Contemporary Arts in London.

Juha is a published poet; his first collection Back Channel Apraxia was published by Contraband Books in 2014, and his chapbook –LAND was published through Oystercatcher Press in 2016. His most recent book, Poetry and Performance During the British Poetry Revival 1960-1980: Event and Effect was published by Palgrave Macmillan in 2017 and examines intersections of poetry and performance during the British Poetry Revival. In 2018, his work was included in the international anthology Wretched Strangers: Borders, Movement, Homes. He is currently researching women poets published in British little magazines, and is writing a new series of poems called Doom Engines.

Rather than setting out to directly follow a particular career path, Juha believes that his line of work allows him to pursue some of his deep-rooted interests in a unique way.

After obtaining his bachelor’s degree, Juha felt as though he wasn’t done with studying, so he went on to obtain his master’s, and after gaining his doctorate, he was lucky enough to be hired as a lecturer. He considers each step along this path to have been shaped by meeting individual goals rather than following a defined life path.

His proudest moments have included receiving his doctorate, being hired as a lecturer, and seeing his work published. More importantly, he is always moved when he sees his students thrive with their own idiosyncratic interests. He is also very proud of DATABLEED, an open-access poetry journal which he co-edits with his partner, Eleanor Perry. In autumn 2018, they are launching DATABLEEDER, a series of poetry and performance events based in Canterbury, Kent.

While Juha attributes all of his English teachers with furthering his passion for literature, it was his theatre classes that proved to be a life-changing experience. It was during these classes that he first encountered Bertolt Brecht, a German playwright and poet, who remains an influential figure for Juha’s views on literature and art. Even to this day, whenever Juha has to deliver a lecture, present a paper at a conference, or do a poetry reading he utilises the concentration and breathing techniques that he was taught during his ISA play rehearsals.

When asked to offer advice or insights to current ISA students, Juha notes, “I think it’s entirely in keeping with the spirit of what I learned during my time at ISA that I take this opportunity – especially right now – to emphasise the importance of bridges instead of walls.” 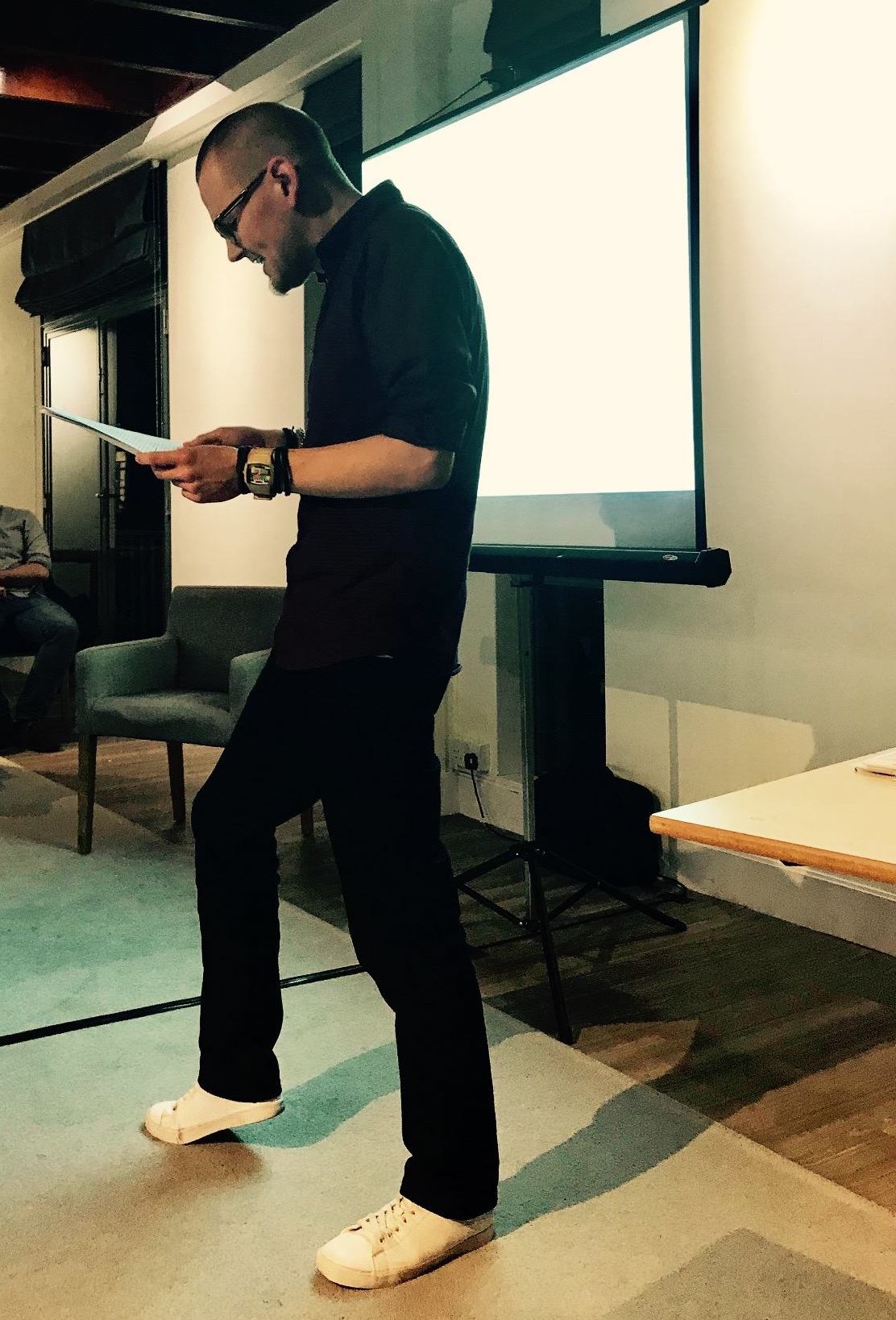