ISA Alum, Omer Manhaimer was recently recognised as a 2019 Forbes Under 30 Scholar, a programme which selects high-achieving students from top universities to come and participate in the annual Forbes under 30 event.  Omer was one of three students from Britain selected to attend.
Having attended the event in Detroit, he was able to connect and network with renowned business and social leaders, AI exports young innovators and entrepreneurs.  He gained valuable knowledge from the best of the best, including Tomas Pfister (Head of Research at Google Cloud AI and Serena Williams.
Omer also participated in, and won, the ErieHack competition, tackling the issue of algae blooms in Lake Erie.
#Under30Summit
https://www.isa.nl/wp-content/uploads/2019/11/Omer-Forbes-Under-30.jpeg 1152 1536 Megan Amelia https://www.isa.nl/wp-content/uploads/2015/08/ISA-logo.png Megan Amelia2019-11-08 16:09:232019-11-11 10:14:25ISA Alum Recognised as 2019 Forbes Under 30 Scholar 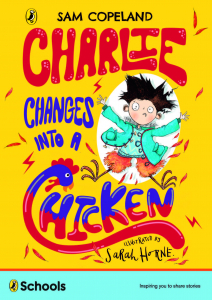 This week, ISA was lucky enough to be visited by ‘The Xtreme Librarian’ and ‘The Chicken Whisperer’, aka book ambassador John Schu and children’s author Sam Copeland, as part of our highly-anticipated Book Week 2019. This annual celebration of all things book-related, much loved by students and staff members alike, is designed to nurture a love of reading in students that will stick with them for life.

Our wonderful librarians organised a host of activities for students throughout the week, including quizzes and challenges, while tents are set up in the library to give students a quiet space to enjoy their current read. Each morning, a Mystery Reader read to students in the Lower School Library, with over 25 staff members volunteering this year, including ISA Director Dr. Bernadette Carmody.

Schu is a blogger and the Ambassador of School Libraries for Scholastic Book Fairs. Library Journal named Schu ‘The Xtreme Librarian’ for the high level of exertion he uses to get students reading! At ISA, Schu presented to students in grades PK-7 throughout the week, held a Librarians’ Workshop after-school and an All-Faculty Book Week Breakfast Workshop.

Copeland, a literary agent, children’s author and self-professed ‘Chicken Whisperer’ met with our Lower School students to talk about his new chapter book series, Charlie Changes into a Chicken and the sequel Charlie Turns Into a T-Rex.

On Saturday, 8 June 2019, ISA returned to Amstelveen’s Schouwburg Theatre to celebrate the achievements of the Class of 2019 and their milestone of completing the IB Diploma Programme. The grade 12 students and their families enjoyed a moving night of inspirational speeches and uplifting performances, culminating in each student walking across the stage to receive their diploma and officially become a member of ISA’s alumni community.

The evening included a range of emotions as students reflected on their memories at ISA and thanked those that helped them through their journey. The ceremony concluded with a reception, giving students, families, and ISA faculty and staff a final opportunity to celebrate the Class of 2019’s accomplishments.

Awards were given to the following students:

The ISA Leadership Award is voted on each year by ISA faculty and is given to a male and female student. This year, the award was given to Simone Appel and Jack Marsh.

In recognition of his commendable effort and commitment to the service of others, Jake Raben was awarded the CAS (Creativity, Activity, Service) award.

The ECIS Award for International Understanding is presented to a student who has represented their country well, can speak at least two languages. Seohyun Kim received this year’s award.

The ISA Award is given to a student who personifies the goals of the International School of Amsterdam, has a positive attitude to education across a range of subject areas and upholds a high ethical and moral standard. The ISA Award was presented to Charlène van der Kooij.

In recognition of their prestigious talent in the sporting arena for ISA, Ellis Huistra and Celeste van Petegem were presented with the Simon Schilp Athletic Award.